On the soul’s journey to perfection, there are so many things that go on. We go through different stages and grow at different rates. One of the greatest struggles we go through is temptation. There is so much so say about temptation and its different stages. There are people bring clarity about the most complex topics in simple ways…you know those people right? One of mine is Samuel Phillips, the son of my father and my brother.

The first stage is the animal stage where we are content to live in the gratification of our senses, totally unaware to the knowledge of sin or our divine inheritance. We are also altogether unaware of the spiritual possibilities within us.

The second stage is the dual stage where the mind is awakened to the reality of its animal and divine tendencies and continually oscillates between the two. It is a state of continual fighting, falling and rising, sinning and repenting because we still love our lives yet we aspire to a life of purity and excellence; the spiritual state. In reality we are continually mortified by this inability to choose and the divine life within us makes this stage fraught with pain, anguish and suffering.

The third stage is knowledge. In this stage, man rises above sin and temptation and enters into peace. Temptation is now a passing phase because he has new understanding and he uses this understanding to measure his level of growth. When man fully understands the source, nature, and meaning of temptation, he is able to conquer it. Temptation is simply a pointer to what a man has not conquered and nothing more. It shows where his animal desires beat his soul. For every man is tempted by the desires of his heart and these desires show the direction of that heart.

The greatest place of congregation is the dual stage where people judge themselves and others against a never ending list of do’s and don’ts. The net result is struggling to keep our feet on the ground as well as how to get up when we fall down. You know those times when you do something you don’t want to and beat yourself over and over again until there is nothing but guilt left? So many of us are stuck here judging and being judged and taking pride in pointing out people who we believe aren’t living right. 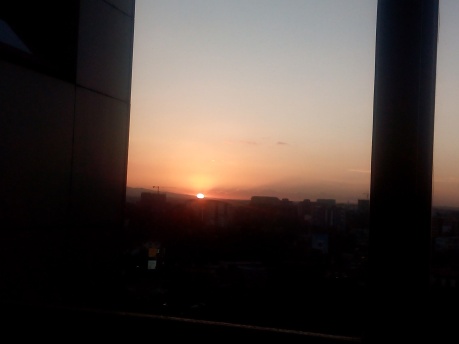 It is so easy to look down one’s nose at others and talk about all the things we are seeing that could be ‘wrong’ with them. I was there a while back, so confident in myself until the day I did something so ‘big’ that it didn’t leave my mind for years. Today, that sounds so foolish to me because I know there is no ‘big or small’ sin or temptation. Temptation is temptation! Sin is sin! Wah! Just imagine being super confident in your ability to live right then you hit a bump so big that you fall apart and the real you is exposed.

Coming face to face with our mortality and fallibility is important because we understand that our walk with God is not a result of our goodness. It helps us understand that we will face temptation but have a choice to move closer to God or remain in the same place. Remember, “Temptation is simply a pointer to that which a man has not conquered and nothing more.”

No temptation has overtaken you except such as is common to man; but God is faithful, who will not allow you to be tempted beyond what you are able, but with the temptation will also make the way of escape, that you may be able to bear it. 1 Cor 10:13

Am I living the way I do because I want to keep people happy or do I live by the word I have heard from God Himself through His word and confirmed by His servants.

A life poured out: A daughter from the pool of the blessed working diligently to live according to her Father's plan. Mother, wife, sister, friend, daughter, mentor, example... leaving a lasting legacy of love, kindness and warmth. View all posts by kyesubire

2 thoughts on “The Journey to Perfection…”